Go back to news

The Blackpool Tower originally took inspiration from the Eiffel Tower, find out more about how these iconic monuments compare today.

The Eiffel Tower and the Blackpool Tower: what’s the link?

Blackpool Tower has earned a name in its own right

FAQs about Blackpool Tower compared to the Eiffel Tower

The Eiffel Tower and the Blackpool Tower: what’s the link?

A brief history of the Eiffel Tower and the Blackpool Tower

The idea for the Eiffel Tower was conceived in 1886 as part of the preparation for the 1889 World’s Fair (also referred to as Exposition Universelle or The Great Paris Exhibition). A competition was launched challenging people to "study the possibility of erecting an iron tower on the Champ-de-Mars with a square base, 125 metres across and 300 metres tall". 107 project ideas were submitted but it was the plans drawn up by entrepreneur Gustave Eiffel, along with engineers Maurice Koechlin and Emile Nouguier, and architect Stephen Sauvestre, which were accepted and given the go ahead to build. Work began on July 1, 1887 and was completed just twenty-two months later in time for the World’s Fair in 1889.

The Blackpool Tower’s construction started just a few short years after the Eiffel on 29th September 1891. If you’ve wondered about their similarity, it was indeed modelled after the famous Parisian Tower! But the plan was never to replicate the exact structure, just to use it as inspiration. It is said that The Mayor of Blackpool, John Bickerstaffe, attended the Great Paris Exhibition (World’s Fair) in 1889 and was so impressed by the Eiffel Tower that he commissioned The Blackpool Tower to be built upon his return to the Town. However, some sources contest that Bickerstaffe ever saw the Eiffel Tower, and suggest he was told of it and the idea of a similar attraction in Blackpool by William Darker Pitt and he just knew a great plan when he heard one!

Who designed the Blackpool Tower?

The Blackpool Tower was designed by Lancashire architects James Maxwell and Charles Tuke of Manchester. Despite  drawing up the plans in 1891, unfortunately neither Maxwell or Tuke lived to see the Tower open in 1894, with Charles Tuke being said to have died on the same day the flagstaff was positioned at the very top of the tower in 1893, the day which marked the structure’s completion, but the building was still under construction.

The same company, under the charge of James Maxwell’s son Frank, went on to design The New Brighton Tower in 1896, which was to replicate (and advance on)  the Blackpool Tower’s structure and style, and attract families for summer holidays in much the same way. The New Brighton Tower unfortunately fell into disrepair during World War One and the structure was dismantled and sold as scrap metal. The building below housing their ballroom and theatre (similar to the tower building rooms you can see in Blackpool) remained, but this part was later destroyed in a fire in 1969.

The building of the Blackpool Tower

The project was originally funded by £20,000 of John Bickerstaffe and his brother Tom’s money. A further £300,000 was then raised before the project began.  The foundation stone was laid on September 25 1891 by Sir Matthew White-Ridley. James Cardwell and Sons of Blackpool laid the brickwork for the building, but the structure of the tower was constructed by the engineering company Heenan and Froude.

Steel for the structure was transported from Manchester via railway which enabled them to move entire sections of at a time. 2,533 tonnes of steel and 94 tonnes of cast iron was used to build the structure. The tower has 4 legs, each of which is made up of a further 4 legs of its own. Engineers braced these further 4 legs with lattice girders, a method where the load is carried by metal in a criss-cross pattern. The main legs are also braced horizontally every 9m.

The Blackpool Tower opened to the public on 14 May 1894, just 2 years 7 months after construction began. When it opened, tourists paid sixpence for admission to the building, sixpence more to go in the lifts to the top, and a further sixpence to see the circus show. 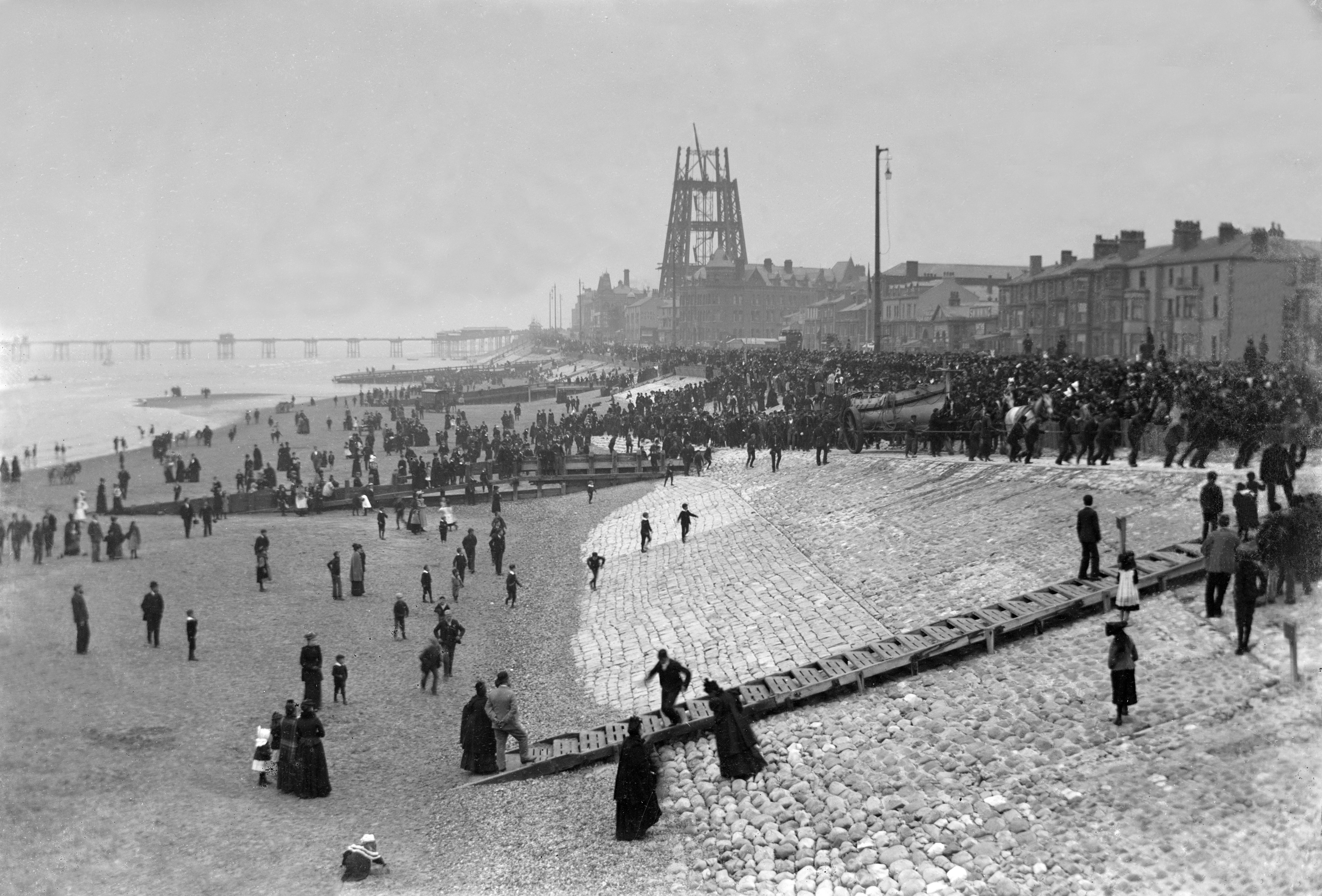 Which is bigger, the Eiffel Tower or Blackpool Tower?

The Eiffel Tower was the tallest structure in the world for the first 40 years following its opening. It was then dethroned by the Chrysler Building in New York (319 metres), which has since been knocked off the top spot by several buildings, with current first place held by the Burj Khalifa, a skyscraper in Dubai, United Arab Emirates, standing at an amazing 830 metres.

Five million bricks, 2,500 tonnes of iron and 93 tonnes of cast steel went into construction of the Blackpool Tower, whereas The Eiffel Tower weighs approximately 10,100 tons. The Eiffel’s metal framework weighs 7,300 tons while the paint that protects the structure weighs 60 tons! 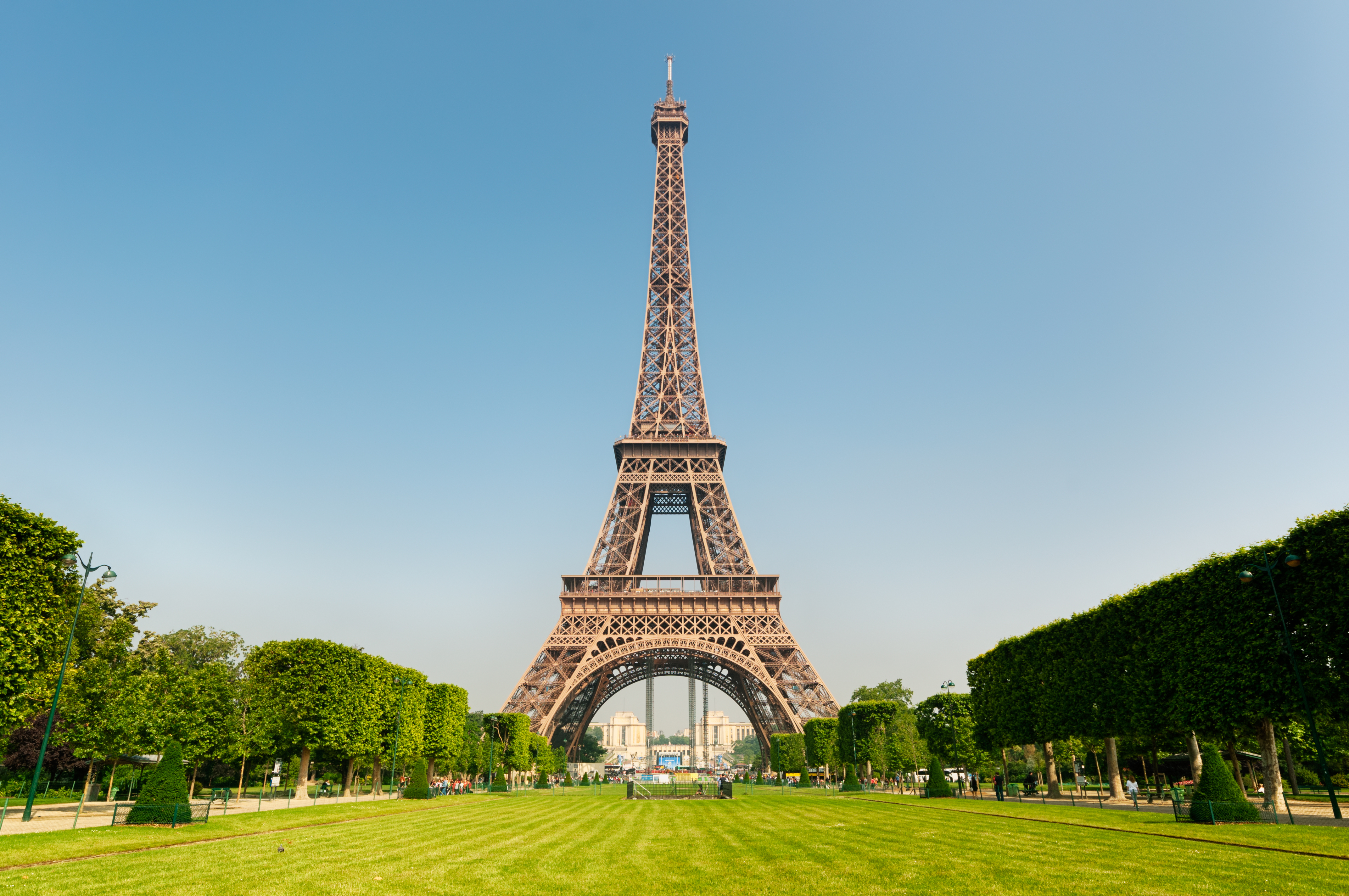 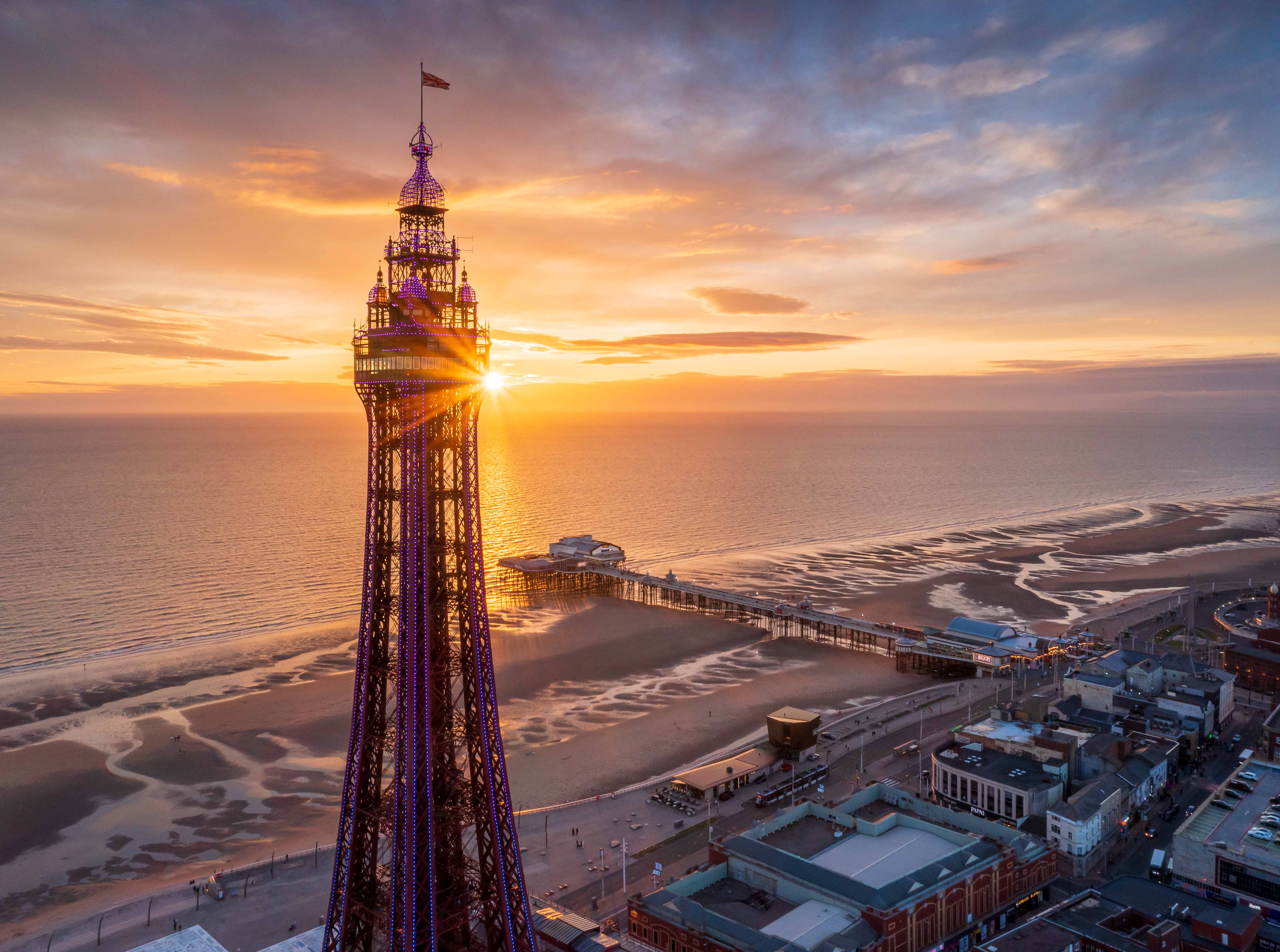 Which is older, the Eiffel Tower or Blackpool Tower?

How much did it cost to build the Eiffel Tower and Blackpool Tower?

The Eiffel tower is estimated to have cost 7.8 million francs, this would be about £66.8 million GBP today (€75.8 million EUR).

The cost of building the Blackpool Tower was about £300,000. This is roughly £30 million GBP in today’s value.

Blackpool Tower has earned a name in its own right

The Blackpool Tower is one of the most recognisable landmarks in the UK, as well as the famous tower structure which can be seen for miles around, there’s much more to its purpose as an entertainment venue.

The Blackpool Tower Circus was established in 1894

The Blackpool Tower Circus opened its doors in 1894 and hasn't missed a season since, not even during the two World Wars! It also managed to be one of the first places to implement a social distancing plan and get the show up and running when restrictions were eased in Covid 2020 and again in 2021.

The beautiful circus arena is situated at the base of the tower, in between the 4 tower legs. The interior you can still see today was designed by Frank Matcham and was completed in 1900 (6 years after shows there began). The Tower Circus has always been home to a long line of resident clowns. Since 1991, it has been home to the Endresz family, who have created a Circus legacy that has become renowned worldwide. Today you can see Mooky and Mr Boo of the Endreasz family on stage at every performance, alongside a wide variety of acts from around the world (which change every season). 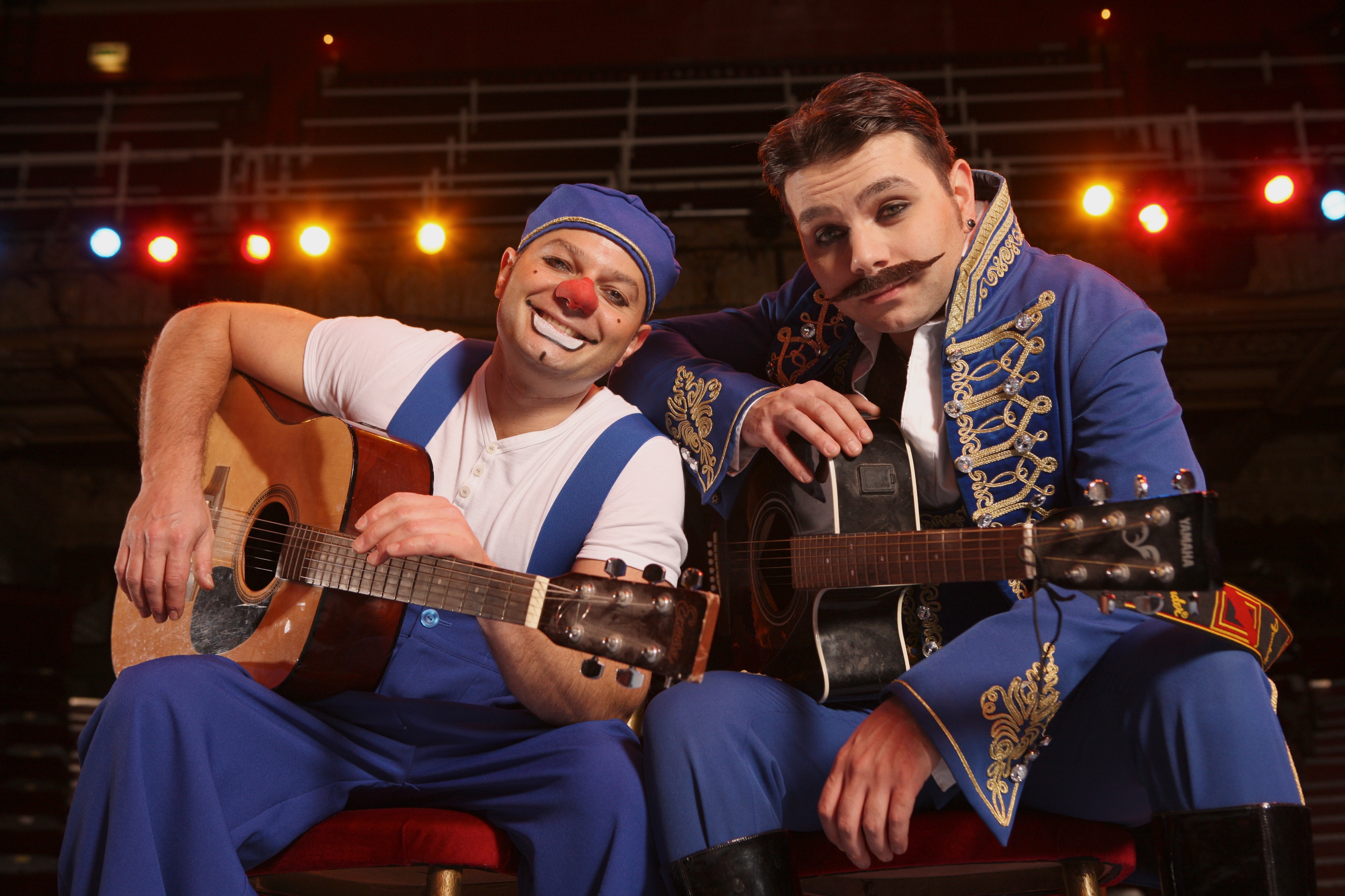 The circus hasn't used animals since 1990, but deep beneath the circus ring, empty stables and pens still remain from the days of performing lions, elephants, monkeys, sealions and more due to the building's listed status.

You can also visit the beautiful Blackpool Tower Ballroom

The Ballroom is world famous within the dance community. Professional and amateur dancers from across the globe often say dancing in this particular ballroom to be a dream of theirs, others like to recall stories of times they have been lucky enough to compete or just dance socially there.

Its beautifully decorated ceilings, sparkling chandeliers, stunning sprung dance floor and ornate balconies are a sensational sight to see. For those who are not dancers, there’s many days in the year that the ballroom is open to everyone to sit and watch the dancers waltz around the floor, listen to the fabulous organists play the Wurlitzer or even to indulge in Afternoon Tea! 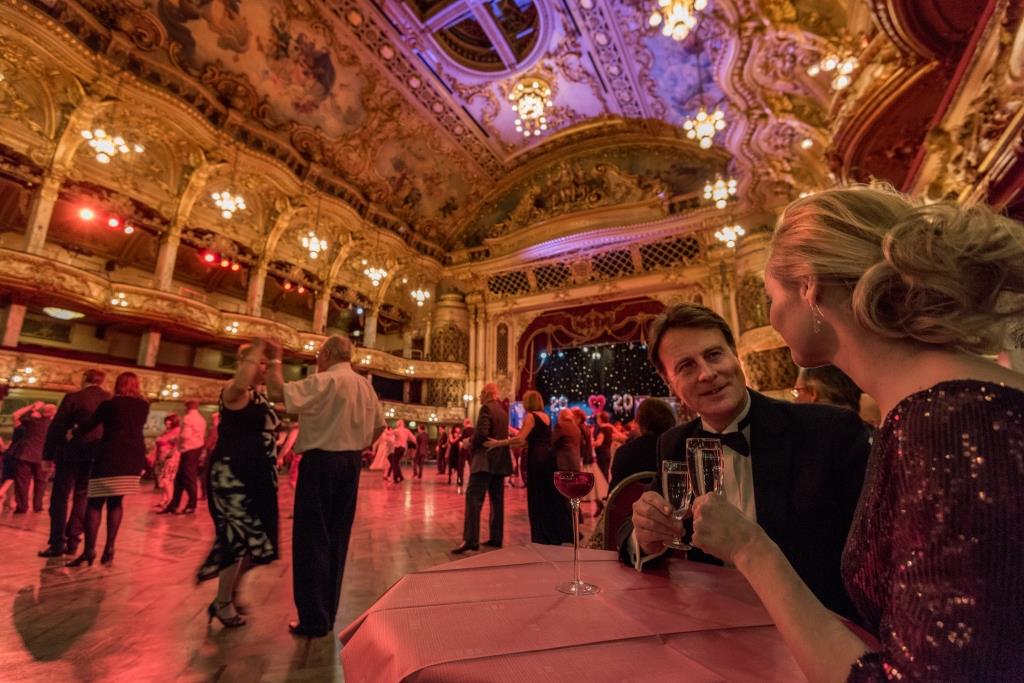 It has a fascinating history, filled with joy, disasters and some dubious rules over the years that are thankfully removed today, making the ballroom a place for everyone to visit at least once in a lifetime.

Is Blackpool Tower still one of the tallest buildings in the UK?

The Blackpool Tower was the tallest man-made structure in the UK and British Empire when it opened. Since then, it has been surpassed many times. The current tallest free standing structure in the UK is Emley Moor Mast at 330.5 meters but this is not open to the public to head to the top. The tallest building in the UK that is open for guests to use as a viewing platform is The Shard in London which Stands at 310 metres, which is just 20 metres shorter than the Eiffel Tower’s pinnacle.

FAQs about Blackpool Tower compared to the Eiffel Tower

Is Blackpool Tower a copy of the Eiffel Tower?

How much bigger is the Eiffel tower than Blackpool Tower?

This article refers to many other fascinating articles and sources from all over the web. If you've enjoyed reading it, you can explore the highlighted links throughout to investigate the subject in more detail and delve further into the various theories and facts referenced here.